When you book with an account, you will be able to track your payment status, track the confirmation and you can also rate the tour after you finished the tour.
Sign Up
807

Enjoy a day tour to Salah El Din Citadel where Mohamed Ali Alabaster Mosque stays, also Al Gowhara palace built by Mamluks and Ottmanian. Then proceed to El Sultan Hassan Mosque, Al- Rifa’I Mosque. Then you’ll move onto Coptic Cairo where you will discove the Roman fortress, the Hanging church, then to St. Sergius which sheltered the holy family. End your tour by the Ben Ezra Synagogue with your own private Egyptologist guide to lead the way.

Tours representative will pick you up from your hotel, to enjoy a visit to the Citadel of Salah El Din in Cairo Where you visit Mohamed Ali Mosque that has been considered one of the most beautful mosque in Cairo it also know as the Alabaster Mosque because its outer walls has been Covered by Alabaster Stone. Then Followed by another big famous Mosque Which is Al-Rifa’i Mosque.

The building is located opposite the Mosque-Madrassa of Sultan Hassan, which dates from around 1361, and was architecturally conceived as a complement to the older structure. This was part of a vast campaign by the 19th century rulers of Egypt to both associate themselves with the perceived glory of earlier periods in Egypt‘s Islamic history and modernize the city.

Then Followed by a visit to the Most and Biggest mosques in Cairo which is El Sultan Hassan Mosque that also known as `Madrasa El Sultan Hassan` that was founded by Sultan Hassan in 1356 A.D The Mosque-Madrassa of Sultan Hassan is a massive Mamluk era mosque and madrassa located near The Citadel in Cairo. Its construction began 757 AH/1356 CE with work ending three years later “without even a single day of idleness”.

At the time of construction the mosque was considered remarkable for its fantastic size and innovative architectural components. Commissioned by a sultan of a short and relatively unimpressive profile, al-Maqrizi noted that within the mosque were several
“wonders of construction”. The mosque was, for example, designed to include schools for all four of the Sunni schools of thought: Shafi’i, Maliki, Hanafi and Hanbali.

Lunch will be served in a local restaurant. Continue driving to the Old Cairo, where you will be able to explore the Mosque of Amr ibn al-As and then visit the Hanging Church, Ben Ezra Synagogue, Church of St. Barbara, Church of Abu Serga. Later you will be transferred Back to your hotel. 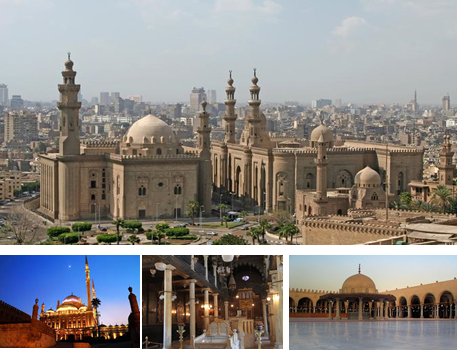